Islamic University is one of the top public universities in Bangladesh as well as the largest seat of higher education in the south-western part of the country.It is also known as Kushtia University as it is situated 24 kilometres south of Kushtia and 22 kilometres north of Jhenaidah district-town.The university is by-passed by Khulna-Kushtia National Highway which provides its lifeline of connectivity with the rest of the country. It is the seventh oldest university in the country and the first university in Bangladesh established after the independence war of Bangladesh. 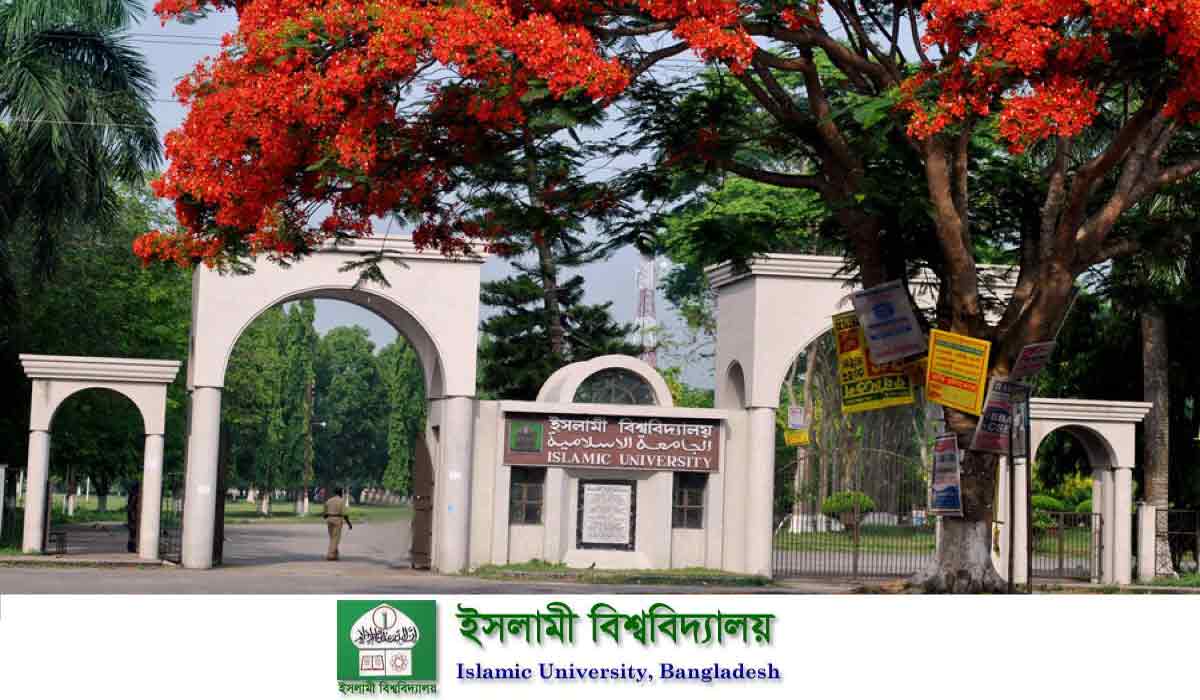 Islamic University is a major public research and PhD granting university in Bangladesh.Islamic university has been exceptionally renowned as the major international center for theological, general, applied science, technology and engineering studies.It is the only university in Bangladesh where a specialized stream of Theology and Islamic Studies and seven others of Humanities, Social Sciences, Sciences, Biological Sciences, Engineering and Technology, Business Administration and Law are running parallel.The university addresses the needs of both the local and foreign students, facilitating them with a broad spectrum of undergraduate studies and postgraduate research and teaching.

History of establishment of Islamic University

On 1 December 1976 then government announced the establishment of the Islamic University to promote a coordinated approach to Islamic education and general education in the country.Initially,it was funded by the Organisation of Islamic Cooperation (OIC) and now it is financed by the Government of Bangladesh through University Grants Commission, Bangladesh.

Islamic University, Kushtia was founded on 22 November 1979 at Shantidanga-Dulalpur (Kushtia-Jhenaidah) by then President of Bangladesh General Ziaur Rahman, based on the recommendation of ‘Islamic University Planning Committee’ on 7 January 1977 headed by M. A. Bari including seven other members.

The Islamic University Act was passed in the National Assembly of Bangladesh on 27 December 1980.On 1 January 1981 the government of Bangladesh appointed A. N. M. Mamtaz Uddin Choudhury as the first vice-chancellor and the university became operational that year.

As construction of several important buildings began, a presidential decree was issued on 15 May 1982 to shift the university from Shantidanga-Dulalpur (Kushtia-Jhenaidah) to Boardbazar, Gazipur on an area of 50 acres. The construction of an academic building, two residential halls and other necessary infrastructures were completed. Initially two faculties (Faculty of Theology and Islamic Studies, Faculty of Humanities and Social Sciences) with four departments (Al-Quran, Dawah, Accounting, Management) were established.

In 1987, two more departments, Sharia and Economics were established.

On 28 December 1988, while the infrastructure development and academic activities were in full swing, the university was again shifted to Shantidanga-Dulalpur (Kushtia-Jhenaidah).

In 1995 three other departments — of Electrical and Electronic Engineering, Applied Chemistry and Chemical Engineering, and Computer Science and Engineering were established.

In 1998 three other departments — Information and Communication Technology, Biotechnology and Genetic Engineering, and Nutrition and Food Technology were established.

In 2007 two more departments, Mathematics, and Al-Fiqh and Legal Studies were established.

In 2009 two more departments Finance and Banking, and Statistics were established.

On 23 June 2009, an Act of the Parliament assigned the President as chancellor, replacing the Prime Minister.

The 'Bangabandhu Chair' was established at IU under Bangla department on 20 July 2017 to carry out extensive research on the life, political activities and ideology of the Bangabandhu Sheikh Mujibur Rahman, the Father of the Nation. Shamsuzzaman Khan, former director general of Bangla Academy, was appointed as 'Bangabandhu Chair' Professor at Islamic University (IU) in Kushtia on 1 October 2018.

Islamic  University at a glace

The Chancellor is the ceremonial head of the university who appoints the Vice-chancellor.

The Vice-chancellor is the executive head of the university. Present and the 13th Vice-Chancellor is Shaikh Abdus Salam, who was appointed on 29 September 2020.

M.Shahinoor Rahman has been the pro vice-chancellor since 20 February 2013.The treasurer is Selim Toha. 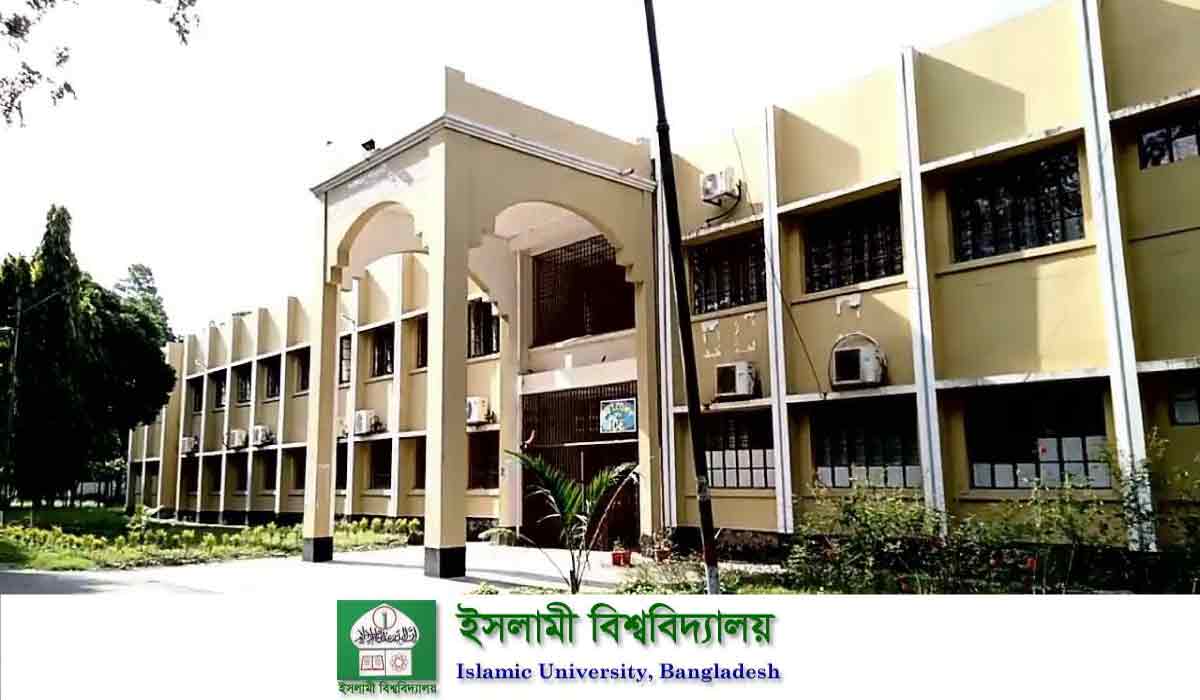 1. Faculty of Theology and Islamic Studies:

• Department of Al-Quran and Islamic Studies

• Department of Al-Hadith and Islamic Studies

• Department of Dawah and Islamic Studies

• Department of Arabic Language and Literature

• Department of Islamic History and Culture

• Department of Law and Land Management

• Department of Accounting and Information Systems

• Department of Finance and Banking

• Department of Tourism and Hospitality Management 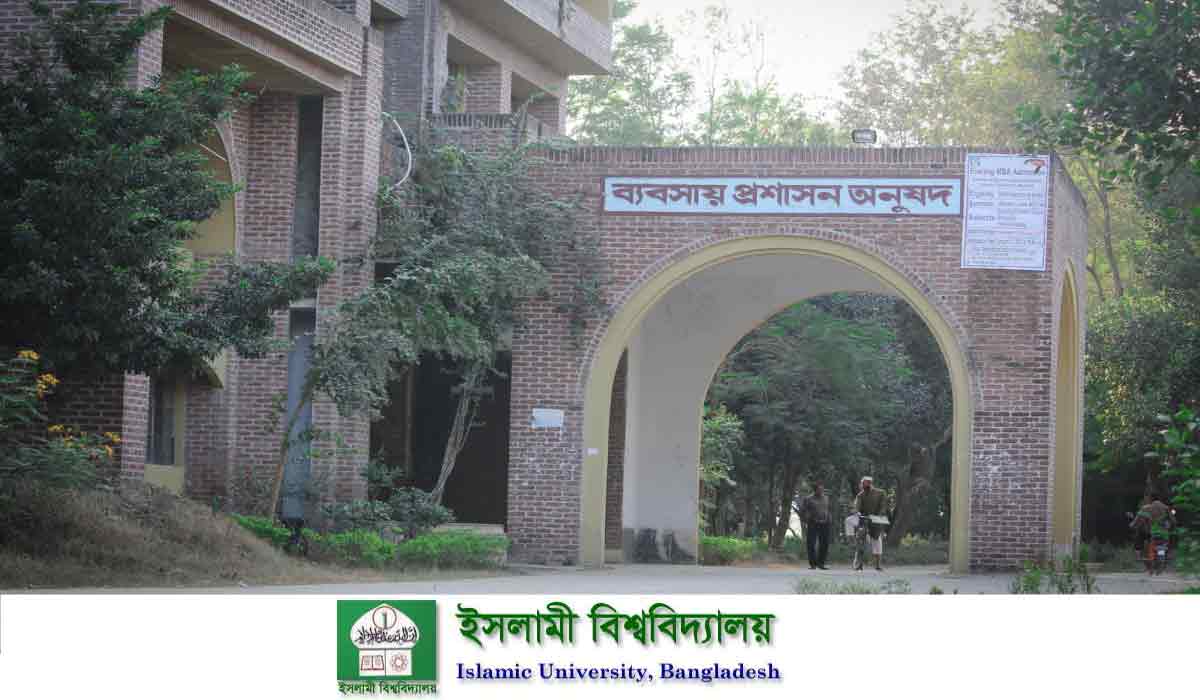 • Department of Environmental Science and Geography

7. Faculty of Engineering and Technology:

• Department of Electrical and Electronic Engineering

• Department of Computer Science and Engineering

• Department of Information and Communication Technology 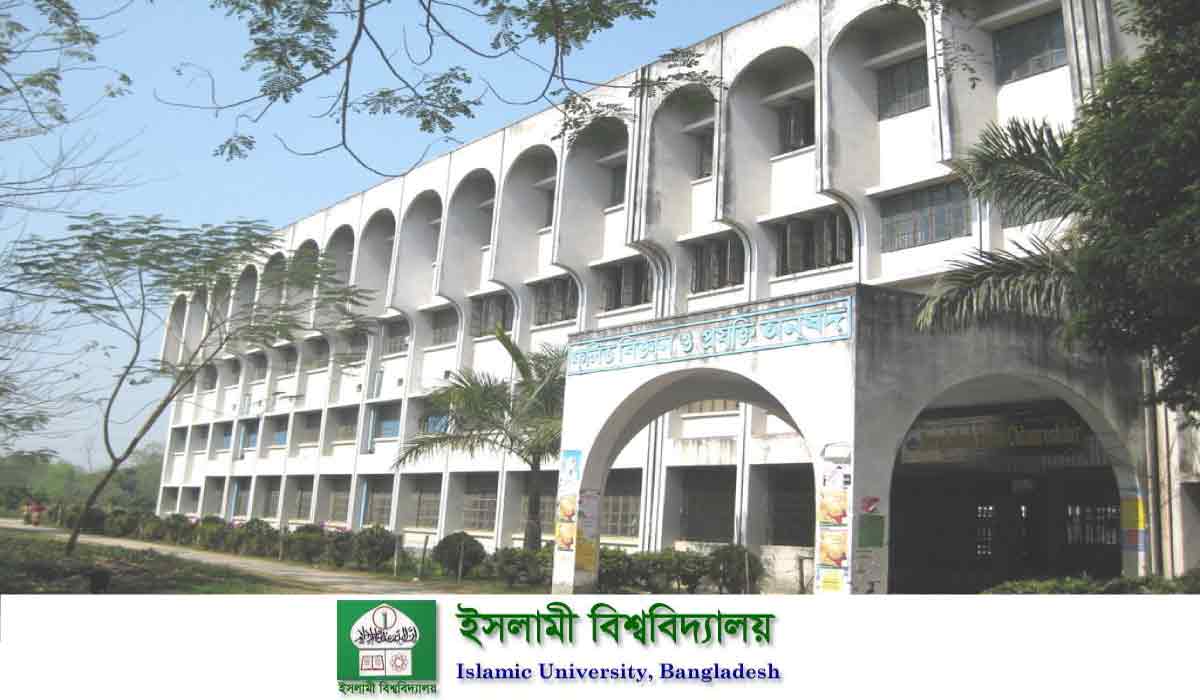 • Department of Biotechnology and Genetic Engineering

The university has 8 halls of residence, four for male students and three for female students.

The central library, King Fahad-bin- Abdul Aziz Library, housed in a three-storey building, is one of the largest libraries in the country. The library holds a collection of more than 103408 books, including bound volumes of periodicals. In addition, it has a collection of over 30,000 manuscripts in various languages and a large number of microfilms, microfiche and CDs. It subscribes to over 19,029 current foreign journals. The library is a member of Bangladesh University Grants Commission Digital Library and of many other international consortiums.It has an advanced level E-Library.Teachers, students and researchers are able to read all journals, books research papers and articles, by using the E-Library facilities.Through UDL it has been linked with 13 E-Publishers-ACM, Emerald, JSTOR, IEEE, Wiley, Cambridge University Press, McGraw-Hill, Oxford University Press, Pearson Education, SAGE, Springer, T&F and World Scientific.Besides, there is the opportunity of remote access to EBSCO Discovery Service and RemoteXs and Digital Library.

There is a central cafeteria, situated within the central auditorium's south side. Moreover, every faculty building, library, residential halls have cafeterias on the campus.

Islamic University Theatre (IUT) was established in 1991 by students.Every now and then drama is staged at the Student Teacher Cultural Centre. 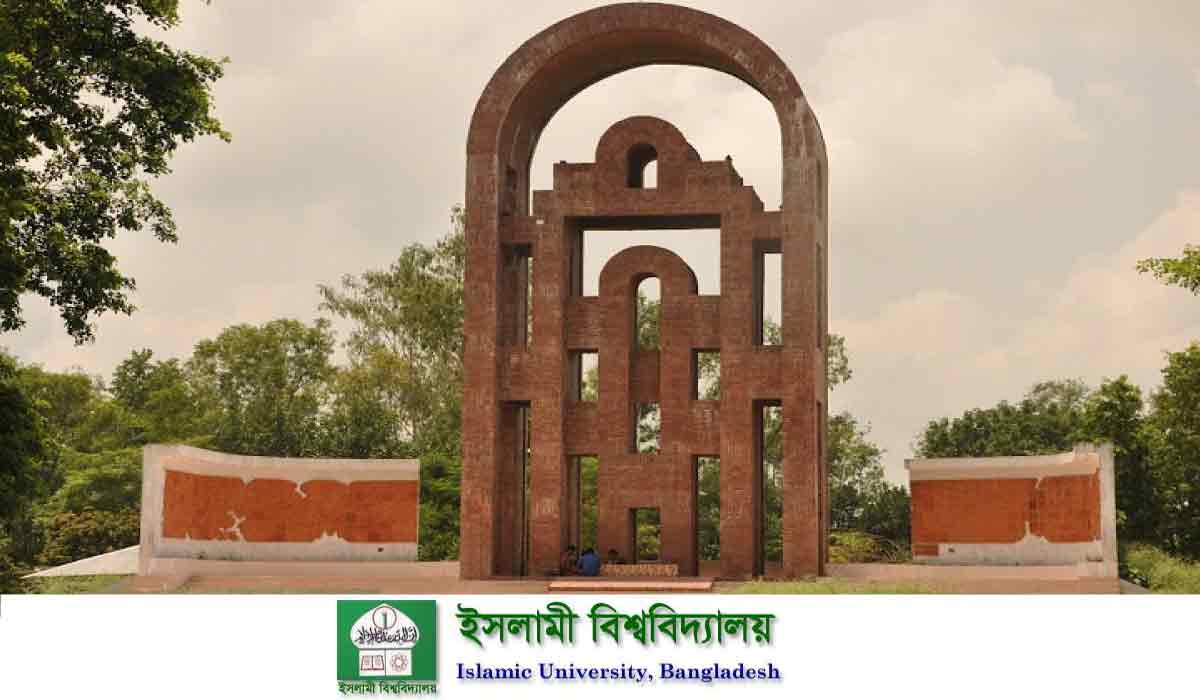 Information and Communication Technology (ICT) CELL offers innovative technology services and solutions to support the teaching, learning, research and administrative goals of the university. The Cell provides a wide range of IT services to facilitate the works of teachers, students and the non-teaching staff. It also provides assistance and partnership to promote effective use and development of ICT facilities across the university.

Islamic University has a computer lab also.It was established in order to accelerate research facilities for faculty, staff and students.

Islamic University regularly organizes national and international seminars, conferences and workshops in its campus. Among them the following are notable:

• A programme on "Ethics of Teaching: Duties and Responsibilities of a University Teacher".

• An international seminar on 'Natural products for drug discovery and development' was held on 26 June 2019, organized by Applied Chemistry and Chemical Engineering Department of IU.

• An international seminar on ‘Contemporary challenges for international humanitarian law’ was held on 8 July 2019, jointly organized by IU Law Faculty and International Committee of the Red Cross (ICRC)

• The Intelligent Smart and Versatile Home Security System was designed by Niaz Mustakim, an M.Sc student of the Electrical and Electronic Engineering (EEE) Department. It can be used for everyday tasks like opening and closing doors, switching lights and air-conditioning on and off, as well as warning of dangers such as gas leaks and fire.[35]

• A robot was invented by ASM Shamim Hasan, an M.Sc student of the Electrical and Electronic Engineering (EEE) Department. The device is capable of collecting information from spaces which are usually out of the reach of humans.[36]

• IU is four times champions in football, two times in basketball and fourteen times in volleyball at the Bangladesh inter-universities sports competition. Moreover, some IU students played in the Asian games and Olympic games for the Bangladesh National Team and acquired prizes at that competition.

Collaboration and MoU with foreign universities and institutes

Islamic University has academic collaboration and Memorandum of Understanding (MoU) with following institutes:

A B M Shawkat Ali, writer, physicist and ex-assistant professor of the Department of Computer Science & Engineering (CSE), IU